Welcome to Advent, the season when HOPEFULLY we rediscover GOD’s hope for the each of us as revealed in Jesus.  Hopefully we are transformed by that rediscovery.  Which is why we enter the story of Christ’s birth again and again.  And so as a way to bring that about, I thought I might seize on the December premiere of “Star Wars: The Force Awakens,” the first new installment in the Star Wars franchise in more than ten years.  It has inspired my advent sermon series which I’ve titled “The Faith Awakens.”

I confess that I am a Star Wars geek but I’m also a bible geek. 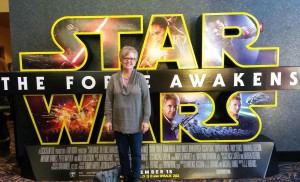 Whether we’re talking first century Palestine or a galaxy far, far, away, there’s something magical and transformative in both.  Author director George Lucas admits that the Star Wars films contain elements of biblical truth mixed with fiction designed to lift up the ongoing battle between the forces of good and the forces of evil.

But would the movie going public recognize hope when they saw it?”  Apparently they did. From Christians to Taoists to those who identify their religion as “Jedi,” fans of “Star Wars” have long seen elements of their faith reflected in the films.  The films offer a model for how to find strength in God or internal balance. He knew exactly what he was doing when he created the concept of “The Force.” (The mystical energy of good and evil) In fact he said, “I put the Force into the movie in order to awaken a certain kind of spirituality in young people.” He also said “Not having enough interest in the mysteries of life to [ever] ask the question, “is there a God or is there not a God?’–that is for me the worst thing that can happen.”  Lucas and I have that fear in common.  Every time I step into this pulpit I pray that your faith will be awakened and that you’ll find a fresh relevance in these old stories.

And so in the words of Yoda “Much to learn you still have…my padawan.”… “This is just the beginning!” On this first Sunday in Advent we begin with the little known but important story of  King Josiah.

Josiah’s reign changed the history of Judah forever because something happened to Josiah that changed HIM forever. Josiah discovered the word of God.

Throughout our Old Testament study the story has been building to this scene. There has been this long trajectory of the people falling in and out of relationship with God. It’s a cyclical story of remembering God and forgetting about God, of God sending a king, then a new king, then a judge, then another judge, then a prophet then another prophet.

Spoiler alert. You and I know what Josiah did not.  Ultimately God will take matters into God’s own hands. How? By being born in a manger as a baby who would walk with us, directly leaving it up to us whether or not we recognize hope when we see it…

It’s a human conflict as old as time. God continuously calls us back to the centrality of relationship.  Sometimes we listen and sometimes we relegate the entire matter to a very nice story that doesn’t have much to do with our real lives.  Or worse, we memorized just enough bible stories to pass question night during our confirmation years…and for some, never picked up a bible again.

Last week I read an article about a recent survey. The survey rated how involved Christians were with their faith as evidenced by how often they attend worship and what kind of programming they participate in.  Would it surprise you to learn that Lutherans are at the bottom of the list with the only denomination less engaged being Episcopalians? At the top of the list were the Mormons and evangelical Christians.

I am a convert to this Lutheran faith. I was a Mormon and it breaks my heart that most Lutherans do not recognize the theological treasure that is ours.  Evangelicals rush to church because they cannot get enough of the bible. Mormons and evangelicals hang on every word, every preposition, and every participle in certain and desperate hope of deepening their relationship with God. It’s an obsession.  But there’s a problem. Their literal and sometimes ignorant interpretation of scripture gets them in trouble.

Mainline denominations like ours brings with them a method of interpretation that is sane, historic, contextual and full of grace and scholarship.  It can lead us to a depth of relationship with the holy that cannot be rivaled.  But Lord in your mercy we have got to open the book and let it speak to us as it spoke to Josiah. King Josiah was transformed by the reading of the book and so should we be transformed.

Which brings me back to Star Wars.  Are not you and I are star followers who, like the wise men, spend our lives following the Christ child?  In the gospel according to Yoda, “Yoda says, `Do or do not. There is no try.’ Becoming a Jedi master and taming the force, this isn’t something you just try. It’s the same as Jesus’ saying, `Be doers, not hearers.’  Advent is our time of reawakening our faith. It is also a lot like a gym. You get out of it what you put into it.

I hope you will be a part of the adventure.  “Then their eyes were opened, and they recognized him; and he vanished from their sight. They said to each other, ‘Were not our hearts burning within us while he was talking to us on the road, while he was opening the scriptures to us?’  (Luke 24)